Accuracy
A data quality indicator, it is the extent of agreement between an observed value and the accepted, or true, value of the parameter being measured.  High accuracy can be defined as a combination of high precision and low bias.

Air Velocity
Air velocity over the surface of a test specimen. More correctly, it is air speed as the direction of flow cannot be determined.

BFB
4-Bromofluorobenzene, CAS 460-00-4; compound that may be used as an internal standard in GC/MS analysis of air samples.

Bias
Consistent deviation of the results of a measurement process from the true value.

Blind Sample
A type of sample used for quality control. The sample is submitted to an analytical lab without their knowledge of its identity or composition to test the lab’s expertise in performing the sample analysis.

Chain-of-custody
A process used to maintain and document the chronological history of an air or product sample. It includes a description of the sample, the name of the individual collecting the sample and each person subsequently having custody of it, and the dates the sample was collected and transferred.
See Forms

Chromatogram
Data obtained from a chromatography experiment. Typically plotted as intensity as a function of retention time.

Chromatography
A field of Analytical Science in which materials are separated for later identification or quantitation.

Clean Air
Air that does not contain any individual VOC at a concentration in excess of 2 µg/m3 and does not contain greater than 10 µg/m3 for the sum of VOCs measurable in a sample. The air should be conditioned to remove particulates and ozone.

Duplicate Sample
Used for quality control, duplicate air samples are two samples taken at the same time from the same site, or the same environmental test equipment, that are carried through all assessment and analytical procedures in identical manner.

Equipment (Chamber) Blank
A type of air sample collected in the lab and used for quality control purposes. The sample is used to check specifically for carryover contamination from re-use of the same sampling equipment (mostly environmental test chambers).

Field and Laboratory Emission Cell
FLEC; a transportable device used for the determination of VOC emissions from building products in which the product specimen forms one surface of the cell.
See Facilities

Field Blank
A type of air sample collected in the field and used for quality control purposes. It is a clean sample that is otherwise treated the same as other samples taken from the field. Field blanks are submitted to the lab along with all other samples and are used to detect any contaminants that may be introduced during field air sample collection and transportation.
See Building Studies

Functional Group
The chemical characteristics of molecules - such as alcohol, acid, ester.

GC
Gas Chromatography - Technique for separating chemicals that are volatile. Chemicals can then be identified or quantitated.

GC/MS
Gas Chromatography/Mass Spectrometry - Technique for separating chemicals that are volatile and then obtaining a mass spectrum of that chemical. Mass spectrum can then be compared to reference materials for identification.
See Facilities

HPLC
High Performance Liquid Chromatography - Technique for separating chemicals that are non-volatile. Chemicals can then be identified or quantitated.
See Facilities

Hydrocarbon
A chemical containing only carbon and hydrogen. Petroleum based chemicals are typically hydrocarbons.

Limit of Detection
Lowest level of a material that can be detected by technique - typically signal is three times baseline noise.

Limit of Quantitation
Lowest level of a material that can be quantitated by technique - typically signal is ten times baseline noise.

Method Detection Limit (MDL)
The lowest concentration of a given substance or analyte that can be reliably detected by an analytical procedure (method).

Polymer
A material composed of repeating atoms, molecules, or functional groups that are linked together in sufficient amounts that removal or addition of a few units does not substantially vary the properties of the polymer.

Precision
A data quality indicator, it measures the level of agreement or variability among a set of repeated measurements, obtained under similar conditions.  Normally expressed as a standard deviation in absolute or relative terms.

Product Loading Factor
Ratio of exposed surface area of the test specimen and the free volume of the chamber or emission cell.
See VOC Emissions Testing

Product Sample
A sample that is typical of the whole product.
See Sending Samples

Product Test Specimen
A representative portion of the product sample that is prepared for testing in an environmental chamber.

Relative Standard Deviation (RSD)
This is the standard deviation of a parameter expressed as a percentage of the mean and is used to evaluate the precision of repeated measurements.

Relative Percent Difference (RPD)
This is an alternative to RSD, expressed as a percentage and is used to determine precision when only two measurement values are available.

SDS
Safety Data Sheet prepared by manufacturer of a product.

Specific Emission Rate (Emission Factor)
Product specific rate describing the mass of a VOC emitted from a product per time at a given time from the start of the test.  Typically expressed as mass emitted per product area per time, but may also be expressed as mass emitted per volume, length, mass, or whole product per time.
See VOC Emissions Testing

Spiked Sample
A sample to which a known concentration of a target compound has been added.  Used for quality control purposes.

Standard Deviation
Used to determine the precision of a set of repeated measurements and is expressed by the positive square root of the variance of the measurements.

TIC
Total Ion Chromatogram - Chromatogram acquired by GC/MS in which the responses of all scanned masses are summed.

Total Volatile Organic Compounds (TVOC)
The summed concentration of all the individual VOCs quantifiable in an air sample by both a precisely specified sampling protocol and a precisely defined analytical method. TVOC concentration is estimated based on a toluene response factor.
See Building Studies

Volatile Organic Compound (VOC)
An organic compound with a saturation vapor pressure between 10-2 kPa and 10-8 kPa at 25oC. Operationally, all gas-phase organic compounds that are detectable by the specified sampling and analytical methods.

We’ll promptly respond to your enquiry and answer questions about all aspects of testing/analysis and pricing.

GET A QUOTE NOW 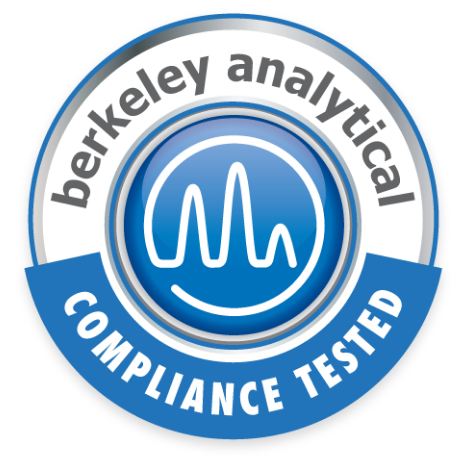 Please fill out the form to be contacted by a laboratory expert. Tell us as much as you can about your needs. We’ll promptly respond to your inquiry and answer your questions about all aspects of testing/analysis including pricing. If you prefer, call us at 1-510-236-2325, toll-free at 1-888-455-0999 or email info@berkeleyanalytical.com.